Getting ready for Brexit: Changes to the immigration system

With COVID-19 having been all encompassing this year, its easy to forget that we used to talk about Brexit all the time – but the end of freedom of movement within the EU is now just around the corner. Since our update in March, the Government has provided further information on its new immigration policy.

The new immigration system will apply from 1 January 2021, when free movement of EU nationals to the UK will end. Our current points-based system will be revamped, and other than Irish citizens, anyone coming to the UK to work will need to apply for a visa in advance.

The new system will be much more flexible than the current points based system, which typically only permits employers to sponsor highly skilled individuals, and often only after advertising the role for 28 days, giving preferential treatment to the resident labour market.

Under the new system, in most cases, employers will still need a sponsor licence but it will be much easier than it is currently to recruit those who don’t already have permission to work in the UK. The new immigration system will apply equally to all foreign nationals, with no preferential treatment for those from the EU. (Note that this will not apply to EU nationals already resident in the UK who qualify for settled or pre-settled status).

Under the new immigration rules, from 1 January 2021, anyone coming to the UK to work will need to demonstrate as a minimum that:

Applicants will require 70 points under the new system and some points are tradeable – so if the applicant doesn’t score in one tradeable category but does in another then they will still be able to make up the points.

The characteristics scored are as follows: 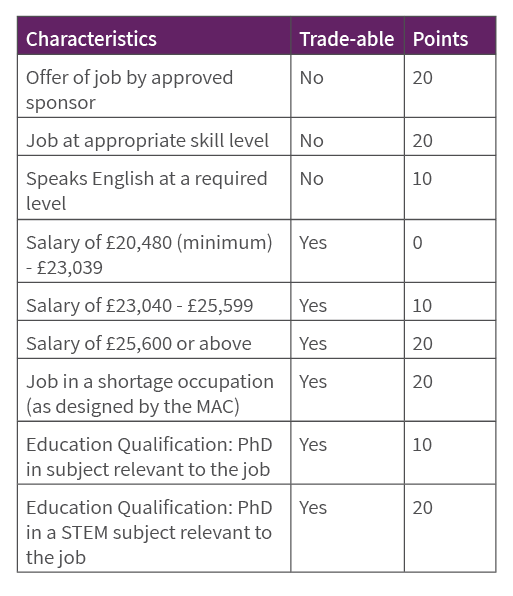 This route exists currently; it enables multinational organisations to transfer workers between group companies to the UK, subject to a number of restrictions. There are likely to be few changes to how it operates. For example, employers will only be able to sponsor employees for role skilled to RQF level 6 (graduate equivalent level).

This route is currently being trialled, until the end of 2020. The Home Office will then decide whether to continue the route under the new immigration system.

There will be some other routes for non-British nationals where they won’t need sponsorship, including:

This will allow the most highly skilled individuals to come to the UK to work without a job offer, but they will require a recommendation from a select group of government recognised bodies:

This scheme exists currently under Tier 5 of the current points based system. It enables applicants from certain nationalities, aged between 18 to 30 years, to come to the UK for up to 2 years. This scheme does have its limitations, but it can be a useful, short-term solution, particularly for employers without a sponsor licence. Those from the following countries are able to apply under the Youth Mobility Scheme:

The scheme also applies to:

Sponsoring individuals to come and work in the UK can be a time consuming and costly process. Some of the main costs involved are:

What should employers do to prepare?

In the majority of cases employers will need a sponsor licence in order to employ a worker from abroad. For those businesses who don’t already hold a sponsor licence and consider that future recruitment will include the EU (or wider) job market, act now. Applying for a sponsor licence is bureaucratic process which is easy to get wrong – we can help you make sense of the rules and be in the best position possible to become an approved sponsor.

Its also important to budget. Applying for a sponsor licence and sponsoring individuals isn’t cheap, so you’ll need to factor those costs into your budget planning.

And lastly, if you currently have EU national employees, make sure they know they must apply for settled status by 30 June 2021 at the latest – but encourage them to apply sooner rather than later.

For advice and support on sponsorship and business immigration law after Brexit, call us now for a friendly chat about your needs.

Independent Vetcare was founded in 2011 and is now the largest veterinary care business in...