The Big 'K': a HR disaster in waiting? Chloe's The Apprentice Blog - week 7 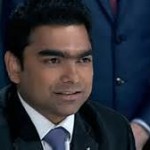 So, it took 7 weeks but it’s finally happened – The Big K, K-Man, Karthik Nagesan was shown the door, and in a shock pre-final boardroom exit! He was hanging on by a mono-thread and it finally snapped…..

Karthik’s performance as PM was the nail in his Apprentice Coffin, and whilst he tried his best to modify his behaviour following criticism in early weeks, he admitted on You’re Fired that this was an act. He did what he was told and tried to be less loud and offensive in order to get the job done. Off the show and back to being his own boss, his risque comments at the filming riled Lady Brady and the producers dropped the worst bits from the final You’re Fired cut. Karthik really is an HR disaster waiting to happen.

We supported SHL to run a compliant collective consultation process, following the need to...